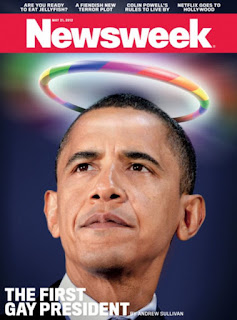 “I have always sensed that he [Obama] intuitively understands gays and our predicament—because it so mirrors his own. And he knows how the love and sacrifice of marriage can heal, integrate, and rebuild a soul. The point of the gay-rights movement, after all, is not about helping people be gay. It is about creating the space for people to be themselves. This has been Obama’s life’s work. And he just enlarged the space in this world for so many others, trapped in different cages of identity, yearning to be released and returned to the families they love and the dignity they deserve.”  -Andrew Sullivan, "The First Gay President" Newsweek


I admit, I've missed quite a bit being oceans and continents away from the US of A. But one watershed moment managed to reach my little apartment in Udaipur last week as I was sipping my morning chai. Front page of the Times of India was Obama's declaration of support for marriage equality. Between you and I, I was always of the camp that believed Obama's previous stance was no more than a mere (albeit calculated and predictable) front to protect his political hide as the over-hyped newbie presidential candidate. Seems my sentiments were shared by Andrew Sullivan in his cover article in this week's edition of Newsweek, which featured the above image and the headline "The First Gay President."

Reading Sullivan's article, I remembered a talk I attended at Oberlin College for Asian Pacific American Month in 2010 where the speaker's last slide was entitled "The First Asian-American President" beneath two photographs of Obama, one as a child in Indonesia and one hugging his sister Maya Soetoro-Ng at his high school graduation in Hawaii. The speaker insisted that Obama's early childhood spent in Indonesia with  his mother and stepfather, his youth spent in Hawaii, his identity as a hyphen American, and immigrant son made his experience akin to that of many Asian-Americans and thus earned him the title "First Asian-American President." And in those terms it totally made sense. Obama could be Asian-American. Obama's identity lends itself quite easily to repeated acts of reading and (re)interpretation. Though he's self-identified as African-American, many still call him "The First Multiracial President." Because it matters much less what Obama thinks of himself than what we the people think of him--what images we project onto his being.

In my course, I used Obama's story, his identity as a tool to understand how multiraciality contains multitudes and how a multiracial critique could be instrumental in breaking down monolithic notions of identity. So I encouraged students to talk about multiraciality as part of black identities, as part of Asian-American identities, Latin@, Native, White, adoptee and queer identities. If anything multiraciality benefits a great deal from a queer critique-- queering race. And there's increasingly more out there in Academe that works at the rich intersection. That being said, I still found myself a bit surprised to see such a bold act of race queering on the cover of a mainstream American publication such as Newsweek.

I don't know if Sullivan was quite sure that he was actively queering race as he compared Obama's racial exodus to the experiences of queer folk. And while I think using a queer critique as a tool is vital to destabilizing notions of identity, it's also crucial to understand that "gay" and "queer" are highly political and politicized words and not colorful labels you tag willy-nilly. So just as it was kinda cute to say Clinton was the "First Black President," (no one, least of all black folk, really believed that), so to, does Obama's new title only serve its true function as symbolism if not just mere sentiment.

The article linking Obama's racial identity to queer experiences does give me hope for a shift in the conversation not just regarding marriage equality but to that notion I'm often going on about: our identities are fluid, y'all. Full stop.

Whether Obama is reelected for a second term, whether he goes down in history as a saint or a villain, a triumph or a failure, one thing is for certain: Obama's legacy will be marked by his symbolic currency. It is a Obama's ability to quite literally absorb our nation's imaginings, our own distinct senses of belonging/and yet not belonging, into his words and onto his "mixed/queer" body and weave it back into his life story and identity that makes him most powerful. I'd like to see you try to do that, Mitt Romney.

The Newsweek cover image itself warrants a little playful analysis: our still disarmingly debonair, now-seasoned President, appearing a little grayer, brow now gently (though, I fear permanently) furrowed, gazing stoically off into some unknown distance. What I find most intriguing is that rainbow halo floating proudly in a glow above his head. Obama as saint, Obama as martyr-icon, potentially committing a yet to be determined act of political suicide/sacrifice?  The halo- perhaps a crown marking his coronation by the queer community?....

Frankly, I think Obama's not in any real danger at this point. A little recklessness would do him a world of good. If anything, that glowing halo will serve the newly sainted/crowned Obama well in the upcoming election, helping him cement the support of the increasingly apathetic millenials who are credited for his sweeping 2008 win, and of course the mainstream gay community whose monetary backing is crucial. But let's not talk politics. For perhaps most significantly, once again, his words, his actions, his body, have changed the national conversation. Obama as symbol, Obama as icon, Obama as chameleon, Obama as both perpetual canvas and national mirror will long outlive Obama as politician...Obama as mere president.


"[T]here is something on this subject [marriage equality] with Obama that goes deeper in my view than cold, calculating politics and a commitment to civil rights. The core gay experience throughout history has been displacement, a sense of belonging and yet not belonging. Gays are born mostly into heterosexual families and discover as they grow up that, for some reason, they will never be able to have a marriage like their parents’ or their siblings’. They know this before they can tell anyone else, even their parents. This sense of subtle alienation—of loving your own family while feeling excluded from it—is something all gay children learn. They sense something inchoate, a separateness from their peers, a subtle estrangement from their families, the first sharp pangs of shame. And then, at some point, they find out what it all means. In the past, they often would retreat and withdraw, holding a secret they couldn’t even share with their parents—living as an insider outsider.


“And this, in a different way, is Obama’s life story as well. He was a black kid brought up by white grandparents and a white single mother in Hawaii and Indonesia, where his color really made no difference. He discovered his otherness when reading an old issue of Life magazine, which had a feature on African-Americans who had undergone an irreversible bleaching treatment to make them look white—because they believed being white was the only way to be happy. . . .

“This is the gay experience: the discovery in adulthood of a community not like your own home and the struggle to belong in both places, without displacement, without alienation. It is easier today than ever. But it is never truly without emotional scar tissue. Obama learned to be black the way gays learn to be gay. . . ."