"There is something fantastic that happens when people who come from different backgrounds meet and fall in love. The children who come from these unions are not mere mixtures; they're "magic potions"! When I look at them, I see exotic spices, fragrant herbs, lovely flowers, and colors that can overwhelm the senses.
I see a vision of the future." 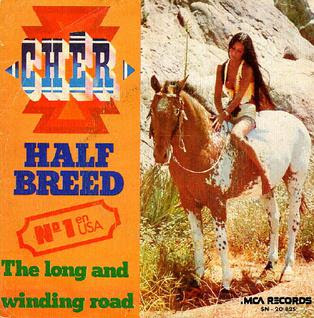 As the  "half-breed" diva herself puts it, multi babies have the tendency to make people catch a serious case of the warm and fuzzies (not gonna lie, myself included).Cher recorded her hit single "Half Breed" in 1973. Being part Cherokee herself, Cher sings about being a mixed race woman and not being accepted by either her Cherokee or white family. She ends up leaving both communities and subsequently becoming a superstar. The simple song is pretty downright depressing, but there's something strangely empowering about her last line "But I can't run away from what I am" sung in a Las Vegas showgirl meets Tiger Lily get-up (that's strangely alluring and offensive all at the same time) on top of a pinto horse. Fastforward more than thirty five years later and Cher is talking about "falling in love" and "exotic spices, fragrant herbs and lovely flowers." 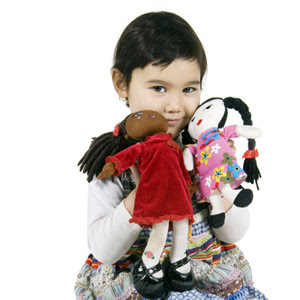 In Cher's afterword to Kip Fulbeck's latest book, Mixed: Portraits of Multiracial Kids quoted above, there's almost this sense of being "intoxicated" by the mere sight of multi kids (aka: magic potions). In these our recent postracial climes, multi babies mark race reconciliation and signal the end of racial "difference". Though nothing can be further from the truth, there is a way in which multi kids are seen as bright and shiny, disarming (...and I present Exhibit A on the left) new members of a changing America. Do multi babies= love conquering all, in this case racial/ethnic differences?
Eagerly flipping through Kip's book and reflecting on the subsequent "oohs, aahs" and the breathy "they're so cute/beautiful" sighs that multi kids usually incite, strangely enough got me thinking about the not so lovely (or distant) realities of our multi pasts. Yeah, I know... I'm such a downer. But as Kip's book demonstrates, we may be headed towards a happier future ( I hope).

Posted by mixed dreamer at 10:56 PM No comments:

Maybe it was the Queen's recent day trip to my home state earlier this week, but lately, I've been feeling an acute London calling...

No, it's not  the seductive British accent (epitomized by James Bond & Sade), or the lure of fish & chips or even better--some good Indian food, it's not those touristy Kodak moments in front of the classic red telephone booths or by the lions and fountains in Trafalgar Square; it's not the chance to torment a beefeater in front of Buckingham Palace, or use the "loo" and ride the "tube" (though obviously, not at the same time)-- it's not even Prince William himself that's making me want to pack up my bags and book the next 747 across The Pond to the great land of the Britons.
It's programs like Mix-d!

Mix-d: The Multiple Heritage Project is an organization (that's actually housed in Manchester, but works in London and all over the UK) whose mission is all about seeing  "mixed race people at the heart of mixed race discussions." Over the past few years they've hosted community conferences, forums and trainings. Mix-d works in partnership with supporters and funders to engage young people, professionals and others in discussion around multi experiences and issues personally, socially, culturally and politically. One of the many things I'm loving about the program is the neologism of "mix-d". The oft used term "mixed" or "mixed-race" can conjure up ideas and images of being "mixed up" and also signal a history of multi people  being spoken for and about as opposed to multi people speaking for and about ourselves. (Subjectivity 101 courtesy of many months in college spent worshiping the writing of British cultural theorist Stuart Hall)  British home-grown organizations like Mix-d as well as online websites and thorough resources like InterMix.Org are dedicated to empowering, supporting and educating the multi community and allies in the UK. Check out the video below of their photo-book of multi people (very a la Fulbeck :)
I've had my eye on the UK and it's brand of "multiculturalism" every since reading Zadie Smith's first novel White Teeth. Like the US, the UK has had a long (though mostly silenced)  multi history. Also, like the U.S., the year 2000 marked the first time that British citizens could check a box designating their "mixed" ancestry on their census. Over the last two decades, the multi population has grown exponentially and is coming of age at a time when "multiculturalism" and now "post-racial" are the order of the day.  Unlike the U.S., however, many multi Brits are fighting to identify solely as "mixed" without having to explain what they "are." The conversation(s) play out out a little differently here at home where identities are so highly politicized- particularly racial and ethnic identities. We're also a vast country and from region to region multi people are experiencing, identifying and negotiating their lives and identities very differently from one person to the next. Mix-d stresses education and is very youth-oriented and community-based. They also discuss terminology and wording-- something that's crucial in order for multi people to speak for and about ourselves. It's high time the UK and U.S. multi movements exchanged notes so that we can make our respective work even stronger.

There's great work being done in the UK, Canada and even parts of Austrailia. Other Tongues: Voices of Mixed Race Women is an anthology edited by Canadian writers Adebe D.A. and Andrea Thomspon set to be published this coming winter. There's also a great deal of amazing scholarship in Canada, the UK and Austrailia dealing with critical race, and critical mixed race studies in those countries but also discussing Africa, Asia and Latin American issues of multiraciality.


Though I probably won't be making that trip across the Atlantic anytime soon, I think engaging in conversations on multi issues transnationally from the Americas to Europe, Africa, Asia and Austrailia-- is essential, not to mention it would be pretty cool to think of a global multi connection and consciousness. We can dream a little, no?