Generation Mix? A Statement of Purpose

Call it a quarter-life crisis. A change in the winds, perhaps. Maybe it's my sad stack of rejection letters from graduate schools. Whatever the case may be, of late,  I've been having a bit of an intellectual, (even vaguely political) existential crisis when it comes to "mixed-race" issues. So, almost two years since I embarked on my self-proclaimed crusade toward a radical engagement with mixed issues, it's about that time to remind myself of the basics that started it all.

First off let me state: I'm a product of my times. I'm a millenial. We try hard to hang on to those foggy late 80s early 90s memories, pretending we weren't drooling Gerber mush over our bibs the night the Berlin Wall came down-- all in vain attempts to separate ourselves from our younger text-happy, equally tech-junky, mass media dependent, Disney Channel-fed, over-stimulated siblings born after 1990. We're all the same. Part of the newly christened "Boomerang Generation" of wandering twentysomethings who were raised partly, in the boomtown years of Clinton, but who really came of age under the dumbing apathy and silencing control of Bush Jr. We've gotten a pretty bad rep for being coddled, apolitical, just a touch nihilistic and downright lazy (Look! in our defense, try graduating from college right at the start of one of the greatest recessions in our country's history!)

And yet, we were the generation credited as most responsible for getting the first black president in the White House. We're the generation with the largest number of college graduates in the nation's history-- though we're now making history as much for being degreed as we are for being indebted and jobless. We're among the first children of the Internet age, though we vaguely remember early life without it. We're the "Ism" kids-- growing up amidst more (inter)national and societal ideological shifts and trends than we could imagine.

I myself was spoon-fed a good amount of liberalism... I blame that mostly on my New York roots and liberal arts education. The most activist and progressive among us have a nostalgic leaning towards revolutionary iconography of the 60s and 70s-- because if truth be told, we have few contemporary heroes... We were born at the height of multicultural politics only to currently find ourselves right on the cusp of colorblindness and post-raciality. We've been called Generation Mix- with a growing number of us choosing to claim multiple racial and ethnic identities. All of these things among many others have informed the type of young adult I've become and (most relevant to this conversation) how I see myself as a woman of color, as a mixed person in the U.S.....It's to my generation and those that follow that I often find myself speaking.


Mixed-Consciouness: In Search of a Political Education
Political education is crucial and yet, many of us are painfully deficient. For me political education is about developing a critical consciousness- a fancy word for a way of thinking and being and perhaps, most importantly understanding who we are and how we fit (and don't fit) into wider systems and structures of power, privelege and opression we are all a part of. Since mixed folk have historically never been recognized as legitimate social or political subjects in this country, figuring out who we are let alone how we fit into these systems can be a struggle to say the least.

So how do we politically educate and raise consciousness-- individually and collectively? Well, for me it starts with taking a look back into our pasts. Now, the type of reading and understanding of history I'm taking about it not this often random, ahistorical revisionist type that attempts to reclaim "mixed-race" people of the past and present: DuBois was mixed and so is Slash!!!Wooot!!!(though very cool, nonetheless). Our history is there, between the lines of  Indigenous histories, Black histories, colonial history,U.S. expansion, immigration, Asian-American history, Latina/o & Chicana/o histories,  U.S. military imperialism etc etc.-- we’re all there, we are and our ancestors are all part of these histories. Even me, with parents who didn’t come to this country until the early 70s. My history is nevertheless tied to immigrant histories and policies that made it possible for my parents to come here, my connection to Black, Latina/o and East Indian histories are rooted in my parent’s identities as part of the wider African and Indian diasporas and systems of global colonialism and imperialism that spread millions around the world over centuries and subjected them to the phenomenon of racialization.

I developed the "Mixed Dreams"  Experimental College course at Oberlin in a humble attempt to patch together a Mixed History 101 and to start to provide a “political education”--tools with which young mixed folk and transracial adoptees could explore who we are, where we’re coming from and how to feel empowered enough to locate ourselves in those histories and identities. I’ve also had students who identify as monoracial and my greatest hope is that we can use discussions on mixed identities, to also break open myths of monolithic identities, cultural & racial authenticity and purity. Isn’t being a 'hyphen American' in key ways also a “mixed” experience? Can we also discuss queer identities as parallel to if not linked to “mixed” experiences as well? What about issues of socioeconomic class and access. In the course, we speak very specifically about mostly “first generation mixed-race experiences post 1967 (acknowledging all the while the limitations of that)-- but we also use multiraciality as a lens through which we can engage with a wider range of issues concerning identity, belonging and perhaps most significantly social justice. In doing so, the discussion changes from some unique, community-specific discussion on our experiences that happens behind closed doors, into a wider, more powerful dialogue we can all deeply benefit from having.


Living on the Color Line: Fighting for Social Justice

Mixed folk's racial loyalties and politics are often under attack. There are quite a number of haters out there who for good reason, are wary of the multiracial wave and its implications on racial justice. The need to be recognized as multiracial on forms and in the general schema of American racial politics has been seen as an empty, individualistic desire that is not only pointless, but feared as destructive to the advancement of other "monoracial" communities of color. Those fears are not without some basis. But I am starting to get a tad defensive about people questioning just how “down” mixed people can be. It’s getting old. It’s true, as mixed people we live on the colorline, but just living there isn’t going to provide any buffer or change much if any of the tensions and violence that still continue to erupt on that line. I believe the only way we can truly start to be a part of changing the racial landscape and speaking some truth to power is by tapping into what Prof. G. Reginal Daniel  (Sociology, UC Santa Barbara) called the ‘greatest tool in our arsenal-- our anti-racist possibilities.’ For me that requires us to tell our stories (the Mixed Roots Film & Literary Festival is truly committed to that), critically and with sensitivity while educating ourselves and building that consciousness so that we can find the voice to say,


I’m mixed and proud, my mixed identity is rooted in the legacies and struggles of people of color in this country and transnationally and I recognize the privileges that can effect the ways I move through this world in relation to white supremacy and power.  I won’t collude or be coopted by disguised white supremacy  and its insidious henchmen Multiculturalism, Colorblindness and Post-racialism. I’m no mixed-up, confused, tragic anything, nor am I some hybrid, superhuman. I’m family,  a legitimate member of various communities--I’m a partner, an ally, and I stand and act in solidarity.

Posted by mixed dreamer at 5:52 PM No comments: 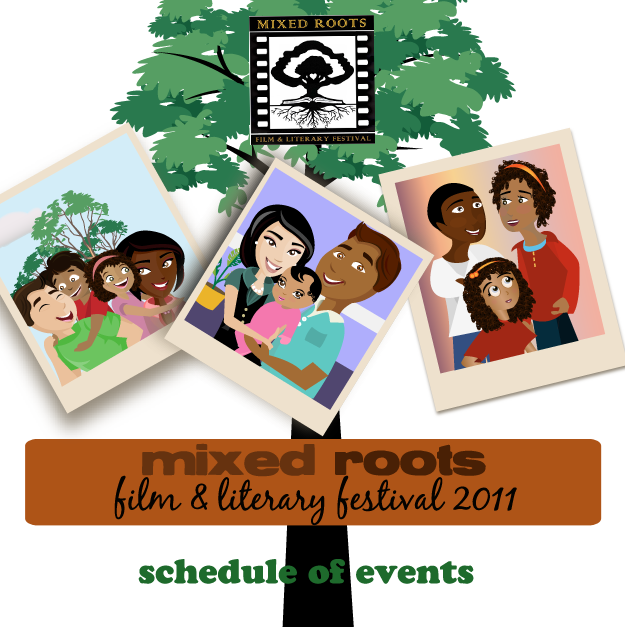