Back to The Future: A Response to 'Young & Mixed in America'

"One in 19 people are born mixed race and if you keep mixing there's going to be an average color that pops out...probably not in the next decade, but probably in the next century or so things will have changed a lot because things are changing exponentially and because of that race will no longer be the big hot topic...at least not the way it is now.   Most people will be in some way mixed" NYT 1.20.11 "Young & Mixed in America"

Since the late 90s, every few years an article or segment appears in our mainstream media about mixed-race people in the U.S. The New York Times, in particular, has often kept its fingers on the multiracial pulse.

In 2001, it was a NYT article declaring that now, given the choice, 6.8 million Americans checked more than one box in the decennial census. This was followed by another article that same year: "Multiracial Identification May Affect Programs" which expressed concerns about what increased multiracial identification could do to state/federal programs and policies based on enforcing long fought for civil rights. In 2003, the NYT article "Generation E.A.: Ethnically Ambiguous," focused on media and advertising. In 2005 "When You Contain Multitudes,"(oddly enough published like a new trend under "Fashion & Style") covered MAVIN Foundation's highly anticipated "Generation Mix Tour."  The video "Being Mixed in America" and an article "Who Are We Now: New Dialogue on Mixed Race were featured in 2008. Throughout 2007 and 2008, a few other articles appeared discussing what President Obama's mixed heritage could mean about the future of race in the U.S. Most recently, this past Saturday, January 29th, 2011 the NYT featured a video and an article entitled "Young and Mixed in America" which cover the rise of multiracial-identified students and organizing on college campuses.
...Now, I've only been alive for twenty four years and I vaguely remember anything before the late 90s. But I've been getting this weird sensation lately, that when it comes to discussing mixed issues in this country we're like a broken record-- repeating the same basic information for the past 10 years-- Surprise! There's mixed people in the U.S. They are visible and starting to be more vocal about their identity. Soon we'll all be mixed. Yay! Full stop.
But when do we move past that? When does the cover story move further and more profoundly into the issue? Mixed people seem to be always in a process of "becoming", on the brink of fully "being" and reinventing the wheel every few years-- particularly younger generations.

I remember being a "multi baby" once in college, navigating my multiple identities and my spaces and finding and defining community for myself. The MAVIN Foundation was alive and well then, and I remember watching the film Chasing Daybreak about the Generation Mix Tour in a room full of other mixed students. Some students were mobilizing to specifically register other mixed people to be bone marrow donors. Others attended conferences solely dedicated to mixed students at other colleges. I remember when the first Kip Fulbeck book Part Asian, 100% Hapa came out and everyone wanted Kip to grace their campus. I also attended a small liberal arts college and was privileged to have a space where I could figure out what being mixed meant to me. Granted, it was always an uphill battle to figure out the needs of the mixed student community and there were always issues with support vs. activism, leadership, membership and organizing as with any student org. But, it was a start and one that many college students (let alone K-12 students) don't ever get to experience. 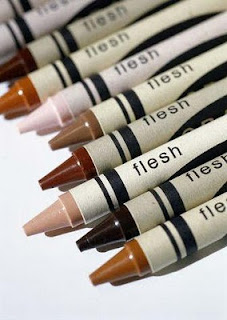 I work in higher education now and have found myself advocating for multiracial college students in a big way because it's true... the numbers don't lie and students are being even more vocal about the ways in which they choose to identify--mixed race or otherwise. But still, there are an overwhelming number of mixed students who come in feeling like they've been the "only ones" in their high schools and hometowns; mixed students struggling to navigate their spaces, not getting validation for their experiences and not hearing from either their peers or their professors about their history (yes, we have one-- several actually).

So, on the one hand it's amazing to know that there's visibility and recognition of the mixed community. Yet on the other, many of the articles I listed above speculate in some way, shape or form, what a mixed identity-- really, what a mixed body could mean for the "future" of race in America. I'm done with it. I kinda want to say... it's not about you right now, America. It's not about what "average color" is going to eventually "pop out"-- the browning vs. the whitening of America. My body will not be used as a launchpad toward some raceless, colorblind national myth or even as a resting place for dreams of race reconciliation. Not right now. Centuries of history has shown that mixing doesn't make race irrelevant. In key ways, race in the U.S. was constructed to confront the already existing reality of race mixing. So that can't possibly be the answer to our racial dilemmas. Since "multiracial" wasn't (and still isn't) a federally accepted racial categrory, no real comprehensive data exists before 2000 about how many people actually were of mixed race. But I'm sure that at the height of slavery, there was no doubt a sizeable amount of mixed people in the United States. They just weren't being counted, that's all.

What has changed drastically is the fact that "multiracial" is becoming more visible as a legitimate identity on its own. So, what I am more concerned with, is less about what this means for the racial redemption of America, but rather about how we empower and support that identity development-- critically and sustainably as parents and family, as educators, as peers, as policy makers and as a society. How can we educate, build community and reveal our histories-- those that already exist between the lines of various intersecting national and global histories? How can we contain all our multiple identities in a still rigid racial classification system and understand what it means to be mixed and black, mixed and Asian, mixed and white, transracially/transnationally adopted etc?

There's a spotty institutional memory that hasn't been passed down as fully as it could be and organizations who were at the forefront of advocacy work like MAVIN/The Mixed Heritage Center, MASC, iPride, AMEA are active (some less so than others) and media like the weekly podcast Mixed Chicks Chat among many others are still out there doing their thing. But few that aren't out on the west coast or weren't in some way connected to the early movement know anything about their existence. So we're left wandering around in the dark, trying to reinvent the wheel and making the same news over and over.

I want this generation and the next generation of mixed kids and adults to know that there was a movement, however flawed, however much a blip compared to things like the civil rights movement, but a movement nonetheless of activists and advocates, families and  young multiracial people that fought for recognition in the face of controversy and a centuries old system of power that served to either deny or grant people humanity based solely on the color of their skin.

Being mixed isn't some developmental phase you deal with in college and move past by your mid 20s. Nor is it a passing demographic or social trend. It's an identity and a lived experience.
It's ten years later, mixed folk. How far have we really gone? And how conscious are we of where we're headed?
Posted by mixed dreamer at 12:35 AM 1 comment:

The fabulous duo of Mixed Chicks Chat and their team of amazing organizers will be hosting the 4th Annual Mixed Roots Film and Literary Festival in Los Angeles, California this June 11th- 12th at the Japanese American National Museum. The festival is currently seeking nominations for their event line-up! See their call for nominations below and if you have any great nominees fill out the survey by February 14th.
Posted by mixed dreamer at 2:30 PM No comments: 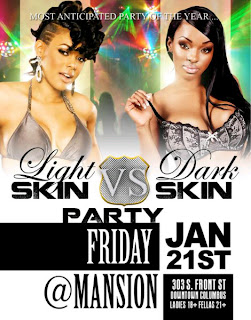 Here we go again....
Cherished readers, I closed the year 2010 with a pre-holiday hiatus blog post entitled For Mixed Girls, For Black Girls. I wrote it as a call to "lighted skinned" and "dark skinned" women in the black and mixed-black community to confront our pain and our struggles and ultimately come to a place of healing, love and understanding. No sooner do we hit the  new year, however, does a club in Columbus, Ohio start planning a "Dark Skinned vs. Light Skinned Party" (Exhibit A to our right).  Club promoters apparently thought it would be cute to use the Twitter hashtags #teamlightskin and #teamdarkskin as inspiration for their party, which has subsequently caused a Twitter frenzy and blogosphere sound-off (see Clutch Magazine's article on the party) over the past few weeks...

To add fuel to the already volatile colorism battle that ensued in cyperspace, our very own mixed race entrepreneurs of Mixed Chicks hair products-- a brand that makes products for naturally curly/kinky hair (and which I've been using religiously until well, now) allegedly tweeted
"#teamlightskin sure hope all will try @Mixedchicks to care 4 those curls.” The company has stated that it sent messages to all teams, not just #teamlightskin. (check out Black Girl With Long Hair's article on this subject. In addition, Sakita Holley's blog discusses the brand's PR epic fail that caused huge fallout in this article ).

But I guess for me that's neither here nor there. The damage, despite whatever good, clean intentions has been done. The Mixedchicks tweeter was a bit unsympathetic if not wholly ahistorical in their follow-up responses to the Twitter debate. The Mixedchicks tweeter seemed to think that we've moved beyond our issues with colorism stating "we didn't realize there was "a war" still. thought everyone celebrated difference like that. again, we apologize." Look, I as much as the next one would like to fantasize about how we can fix the world's ills one natural curly/kinky head and magic hair potion at a time. Yet for some communities, particularly those with people of African descent, hair is political and skin color is political. It's kind of a fact of life at this point. Things have been deeply internalized through systems and institutions of power and oppression that predate you and I, but somehow still effect our day to day. Yeah, it sounds all doom and gloom. And in these our postracial climes, it's not sexy and cute to talk about it. "Let's Confront Colorism" doesn't make quite as hot a party flier. That, however, doesn't make it a non-issue. In many ways colorism and its tons of baggage is a very intra-community issue affecting Latin@, Asian, indigenous and mixed communities alike both here at home and abroad.

There's nothing that gets to me more than colorism within communities of color and the minute I feel like we're taking one step forward, we take a hundred steps back.

Yet, what does it mean for us to move forward? Thoughts?