Other Tongues: Mixed Race Women Speak Out
edited by Adebe DeRango-Adem and Andrea Thompson
"Speaks boldly and poignantly to who we are, and by 'we' I mean … all citizens of 21st century North America."
INANNA PUBLICATIONS and the TORONTO WOMEN'S BOOKSTORE
invite you to the launch of
Other Tongues: Mixed-Race Women Speak Out
on Thursday, December 9, 2010 from 6:30 pm to 9:00 pm
Toronto Women's Bookstore, 73 Harbord Street, Toronto (at Spadina)

Refreshments will be served.
Authors will read from the book at 7:15 p.m.
OTHER TONGUES: MIXED-RACE WOMEN SPEAK OUT is an anthology of poetry, spoken word, fiction, creative non-fiction, spoken word texts, as well as black and white artwork and photography, explores the question of how mixed-race women in North America identify in the twenty-first century. Contributions engage, document, and/or explore the experiences of being mixed-race, by placing interraciality as the center, rather than periphery, of analysis.
Praise for
OTHER TONGUES: MIXED-RACE WOMEN SPEAK OUT
In a fresh approach to the quest for understanding mixed-race identity in the Americas, the multiple genres that find their way into the Other Tongues anthology -- from poetry to photography, fiction to scholarship -- perfectly mirror the prodigious spectrum of their authors’ positions toward the topic. This collection speaks boldly and poignantly to who we are, and by "we" I mean not only women of mixed-race ancestry, but all citizens of 21st-century North America.
-- Lise Funderburg, author of Black, White, Other: Biracial Americans Talk About Race and Identity
These exciting, beautifully inked narratives tell us that, as each woman embraces her biracial or multiracial identity, she mothers a new world, one with equal space for everyone.
-- George Elliott Clarke, Africadian & Eastern Woodland Metis, Laureate, 2001 Governor-General’s Award for Poetry
Passionate, courageous and insightful, Other Tongues speaks affectingly about the pleasures and paradoxes of living between the conventional categories of race. It is a significant anthology, one that I've been waiting for.
-- Karina Vernon, Assistant Professor,
Black Canadian Literature and Diaspora Studies,
University of Toronto
About the editors:
Adebe De Rango-Adem recently completed a research writing fellowship at the Applied Research Center in New York. Her debut poetry collection, Ex Nihilo, was longlisted for the Dylan Thomas Prize, the world’s largest prize for writers under thirty.
Andrea Thompson’s spoken word CD, One, was nominated for a Canadian Urban Music Award in 2005. A pioneer of slam poetry in Canada, Thompson has also hosted Heart of a Poet on Bravo TV, CiTr Radio’s spoken word show, Hearsay.
The publisher acknowledges the support of the Canada Council for the Arts and the Ontario Arts Council
for our publishing program.
INANNA PUBLICATIONS
www.yorku.ca/inanna 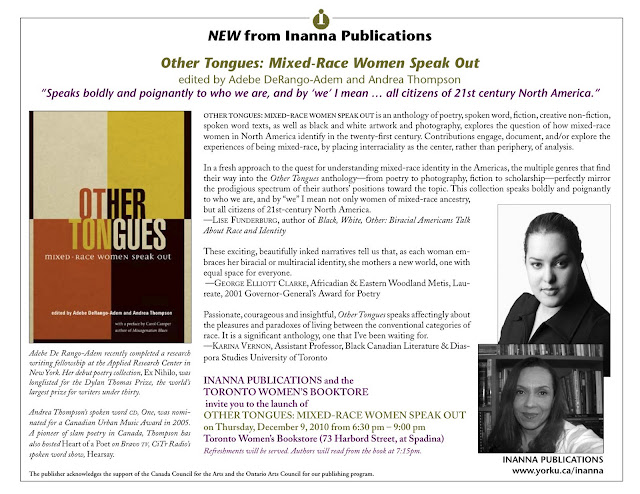 Posted by mixed dreamer at 3:43 PM