The Dominican population "has tried to disconnect itself from its African roots to the point where they've constituted a community that's mostly mixed" but calls itself "indios," wrote historian Frank Moya Ponsin in the prologue of the book "Good Hair, Bad Hair."- Huffington Post "Artist & Educators Aim to Tranform Thinking, Laud Black Heritage in Color-Obsessed Dominican Republic"

I was born in beautiful Santo Domingo, the capital city of the Dominican Republic. And while neither of my parents were
Dominican, I still hold on to the island as a part of my identity. My first passport was a Dominican one. In it, my "raza" or "race" is described as being "trigueña." According to urban dictionary the term means:


In the Caribbean (specifically, Dominican Republic) trigueña or trigueño depending on whether the person is male or female, is someone identified of three (tri)cultures. Namely, someone of indigenous (carib, quisqueyano or taino indians) african (from the slaves brought over by ships) and Spanish (Spain)heritage. It has been used in the Latino/Caribbean culture as a term of endearment, a compliment but also at times as a descriptive word when neither 'morena' or 'blanca' seem to completely describe the subject.

I often wonder what the officials filling out my information saw when they saw 8-month old me. Did they see my brown skin and deem it not too light, not too dark? Somewhere in between, just 'right'? Did they look at the shiny black curls and deem them potentially "pelo bueño" (good hair)? The reality was that I was neither indigenous nor Spanish and my West African father arrived in the DR not on a slave ship, but on a plane to attend medical school only a few years before I was born.

Growing up in the United States, very much aware that I was always being seen as black first and foremost, it intrigues me to think that at some point in my early life, in another country, in another racial order I was seen as something else entirely. And as intrigued as I am, I am also deeply disturbed, knowing the lengths to which the DR has gone to shed its ties to blackness and the African diaspora throughout its history. Being called triguena and morena as a "compliment" basically means you're, thankfully, not  a "negra (dark-skinned, black)." It's downright disturbing to me, to be praised for my "canela (cinnamon)" complexion and supposed pelo bueno.  I am invariably complimented on how "nice" my hair is at Dominican salons. But as an adult I still pay an occasional visit to the Dominican hair salons. I go mostly out of nostalgia for getting my hair done with my mom growing up and because my mixed hair means neither the white salons nor the black salons really know what to do. I also feel very at home in those spaces because whether they would identify themselves as such, I see them as Afro-Latinas, like me.

What Dominican salons have perfected is the art of taking the "African" out of a curly girl's head. And the fact they are so freakin' good at it and will talk about you and how your hair is too thick, or too nappy (ie: pelo malo, said behind your back, assuming you're a black American and can't speak Spanish) means the whole establishment is steeped deeply in race and some intense colorism. One could write volumes on race and colorism in Dominican salons. So if that's so incredibly palpable in a space like a salon (and I've been to ones in Europe and on both coasts of the U.S. and it's the same story) can you imagine what it's like in the motherland?*


Both in the U.S. and in Latin America we have some serious problems with denying the "Afro" in "Latino". Haiti is a devastating example of how maligned African ancestry in the make up and formation of Latin American peoples is. People: Haiti, was the FIRST BLACK REPUBLIC. It was a symbol of freedom, struggle, revolution and triumph. Today Haiti is among the poorest countries in the world. Scores of Haitians risk their lives every year on the treacherous waters between the DR/Haiti and Florida. The DR has had a pathological anti-Haitian mentality that at it's most perverse resulted in the "Parsley Massacre" or El Corte by dictator Trujillo in 1937. More recently, the DR has passed stringent and blatantly racists anti-immigration policies against Haitians. What message is the DR sending? The outright denial and explicit self-loathing of anything to do with it's African ancestry is maddening and so inextricably linked to the colonial project in the DR and the rest of Latin America.  In Costa Rica, where my mother is from, the story is a little different since the black presence in the country came in the form of Jamaican migrants (who were British subjects the time) in the late 1800s. Blacks in Costa Rica were segregated until 1948 despite there being several generations of Caribbean migrants that called the country home. If Latin American societies historically and presently, can't seem to shake their racism and colorism, then how much more complicated does that get when migrants from those countries are confronted with the U.S.'s unique brand of racialization, colorism and racism?

My mother is Afro-Costa Rican and if we want to talk about color, she's a shade or two darker than I am. Ok, so she isn't my biological mother, we know that now. But my rootedness in my Latina identity has everything to do with seeing her navigate her own identity as an Afro-Latina in the United States. Neither of us are ever read as Latina at first look and that was cause for a lot of frustration for me, and still is.  I was always proud to be both Cameroonian and Costa Rican. I was proud Spanish was my first language. I was proud my favorite foods were mangu, queso frito and flan. I was proud of the black cake my mother made for Christmas every year and the jamaica/sorrel we drank. I was proud of the mixedness of the Caribbean identity of my Costa Rican family. For me being Latina inherently encompasses being of African descent. Those two were always seamless in my family. Being black to me inherently encompasses being Latina. So, I get rabid every time I see a form where I'm asked to check the "Hispanic/Latino" box if I'm Hispanic but not black, and asked to check the "Black/African-American" box if I'm black, but not Hispanic. So ummm... what exactly am I supposed to check?


The external reading of my latinidad is usually regional-- in New York, I'm sometimes asked if I'm Dominican. I've also been asked if I'm Trinidadian, Guyanese or if I have some "Indian" in me. Which now knowing that my birth mother was (East) Indian seems ironic. Living in Los Angeles, I got to be the invisible Latina. I got to give servers in taco trucks heart attacks with my perfect, rapid-fire Spanish. On the whole, though, most Americans think Latinas look like JLo not Zoe Saldana. And we can laud JLo's African ancestry insofar as it gave her a donk, and lambast Zoe Saldana for not being "black enough" to play a certain role.

Our language is also limited in how much it can capture.  The terms "Latino" and "Hispanic" privilege Spanish-speaking, former colonies of Spain. Yet, Latin America includes former French, Portuguese, British, and Dutch colonies. In addition, a distinction is often made between the "Caribbean" and "Latin America," when in fact they are all part of the same continent and geographic zone.  It's incredibly hard to contain all those multitudes and create an umbrella term for all of them. As with most other identities, we crave new names to better reflect our distinct histories, cultures and realities. But the U.S. racial order thrives on oversimplification and reductionism. So everyone gets lumped together despite having very different identities and subjectivities. Not only do Latinos get lumped together, but depending on your perceived "color" and socioeconomic class you are commanded to step into the black-white colorline accordingly. There's all this talk about how "mixed" Latino identities are and the Latino community is very vocal about celebrating mestizaje, but I think a huge part of the strategy of becoming a recognized political identity in the U.S. system has been to reduce the definition of Latinidad to an limited understanding of mestizo, to simply mean the mixing of indigenous and European ancestry. And while, that might be more true of some countries (like Mexico, Chile, or Argentina to name a few), African ancestry is a huge part of the racial makeup of a number of Latin American countries.

In the U.S., Afro-Latinos get subsumed into the "Black/African-American" box, which is cool and all. That box is used to making room for all kinds of folk depending on what time in history we're looking at. But in that camp, we face similar problems in encompassing the multitudes. Caribbean immigrants and African immigrants are seldom visible members of the "community". Africa is ancestral, not a modern, post-colonial continent. The Caribbean is a tourist destination-- not the historical site of black radicalism, black revolution and the first independent 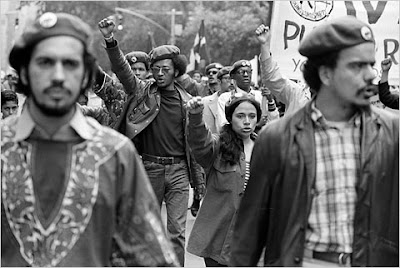 The issue of immigration has become synonymous with Latino political identity.  There are thousands of undocumented black immigrants that are working and being exploited all over the country and even if there weren't, immigration is not just a Latino issue. But according to the media, immigration is apparently ONLY a Latino issue. Few are taking a step back and smelling the rat. Smelling the fact that the arbitrary divisions are made to pit communities against each other and against themselves. How quickly we forget that in cities like New York and Los Angeles, blacks and Latinos have lived and worked side by side for decades. Back in the 60s and 70s the Young Lords modeled themselves after the Black nationalist movement and saw themselves as part of the same struggle of black resistance. Cultural productions like salsa and more recently, reggaeton are unmistakeably Afro-Latino..... look, I could go on this rant for pretty much ever.

I say all this to say, I am incredibly proud of my latinidad and my blackness. I love to think of my mixed identity as part of the complicated and rich histories of people of color in the Americas. I gain a lot being able to think about my mixededness in the context of the hybridity and creolization of Latin America. I navigate being all I am as an American because of my understanding of the cultural and political histories I am a part of. I struggle against the racial order of our country that makes multitudes invisible and reduces complex identities. I really believe talking about race within the Latino experience is a conversation we can all benefit from having. I think it also opens a lot of doors for building political coalitions and fostering solidarity. In my ideal world, this dialogue can also pick up the very crucial conversations about U.S. imperialism, neoliberal policies, exploitation and labor in Latin America and elsewhere that many African-Americans, Chicanos, Nuyoricans and others were very vocal about during the 70s and 80s. These conversations can be cultural, political, global and so incredibly relevant in their scope. Instead, we build walls, we stake claim to certain identities and struggles and not others. We don't see how the struggles and experiences of one group are a window into our own struggles and experiences. And we let a racial system built on oppression, marginalization and white supremacy dictate who we are and who we aren't, instead of standing tall and proud in our collective struggles and histories of resistance to build better, more just and democratic societies.

Note: There has been a growing movement and coalition between Dominicans and Haitians in the diaspora to confront the anti-hatianismo and racism in the DR.